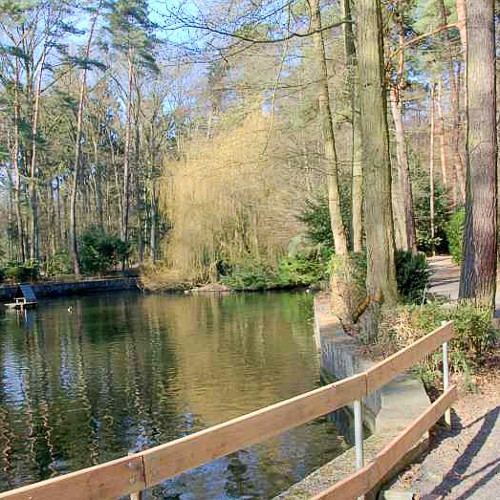 The Troisdorf architect Karl Heise had the ideas how to build this park in the forest in
the 1930ies. Right in the beginning, there are a few aviaries, which are especially
interesting for small children who might hear the cluck of a chicken or the crow of a
cock for the first time in their life.

A little further on, we will see a pond. It was built in the 1920ies, when Troisdorf was
looking for a new place for a cemetery because the churchyard of St. Hippolytus was
already full. It wasn’t an easy search though because the community only had limited
space. One of the possibilities could have been this forest park, but quicksand was
found here and made it an impossible location for a cemetery. Nevertheless, the
ditches that had been dug for the drainage created the small pond which then
became the center of the forest park. Karl Heise came up with the questionable idea
to create a large open space behind the pond to place a 30 meter column on it that
he wanted to carry a huge swastika. Thankfully, the beginning of World War II
prevented this project.