The Main Street Side (of Vancouver's Triangle Building)

from the guide The Unique Mount Pleasant Triangle Building 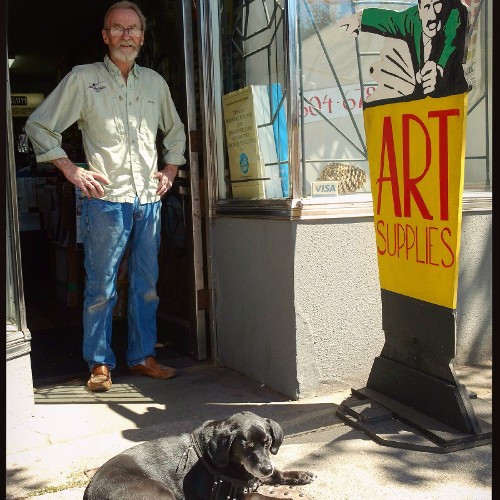 In Mount Pleasant’s early days in the late 1880s, Main St was known as Westminster Avenue and was the only street heading south to the Fraser River from downtown Vancouver. Its name was changed in 1910 and Main Street probably has more independent businesses along its entirety than any other street in Vancouver. Beyond Gene Coffee Bar there are six.

Did you know that independent businesses keep way more money in the local economy than multinationals and create more jobs? That’s one reason I love to shop at them. Another is getting to know the owners and staff. The social connection makes me happy.

Blue Heron Creamery, who make dairy free cheese and have been in the two storefronts just past Gene for a few years, are moving. Although most of the businesses have been in their spaces for a long time, when the occasional vacancy has occurred it has usually been filled quickly. I look forward to seeing who moves in.

Next along Main is Rath Art Supplies, first opened in Vancouver by Stan Rathbun in 2004. Theresa Frazao took ownership upon Stan’s retirement in 2018, after a three year internship with him. Stan was a great supporter of local artists, letting them display work in his windows and making custom canvas stretchers. Theresa has carried these traditions on, including employing carpenter Scotty Colin, who you can often hear building away at the back of the shop. Stan, who passed away in 2020, was adored by everyone, including their pets, like local artist Jennifer Chernecki’s dog Levee. Right from her very first show there, Stan and Levee became buddies. The community so appreciates the way Theresa is carrying on Stan’s legacy in her own way.

Beside Rath is Midtown Mailbox and Business Centre, which has been around since the late 90s and then it’s The 8th Dimension Comic Store, celebrating its 5th anniversary. It moved in when RX Comics closed in 2017 after 14 years in business. I enjoy The 8th Dimension’s Facebook page to learn about all things Comics and am glad a comic store has been on the site for almost 20 years.

In between the comic store and the legendary Pulpfiction Books, is the Wallflower Diner, which first opened in 2009, and has remained a popular watering hole, through the original and current owners. Wallflower describes itself as a place where Omnivores, Carnivores, Vegans, Vegetarians and Celiacs can all dine together in comfort. As an omnivore, I can attest to that, having been there often with my vegan and vegetarian friends. Wallflower was even made into a custom LEGO kit by Vancouver’s Heritage Bricks in July, 2020. In April, 2021, when so many restaurants were needing patio extensions to survive all the COVID restrictions, Wallflower didn’t qualify because of construction and parking protocols. Chris Brayshaw, owner of Pulpfiction, offered up some of his storefront space, which added two tables to Wallflower’s one. Eric Neilson, one of the owners of Wallflower, spoke about how important even three tables were and how grateful he was for his neighbour’s support. This is reflective of the tight and long-standing Triangle Building Community.

Pulpfiction Books was established in June, 2000 and I love that its website makes a point of saying that their new, used, & out-of-print books are chosen by readers, not algorithms! Pulpfiction is connected to another venture in the building. But that happens upstairs. Join me for the last leg of the Triangle Building sound walk.