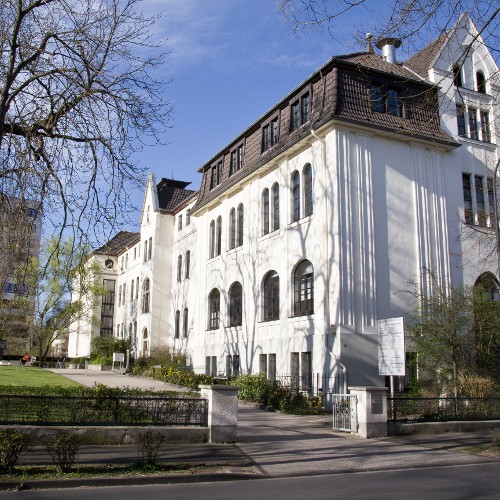 The hospital of St. Josef is the oldest building in the Schlossstrasse. It was built in 1902.
In the end of the 19th century, Troisdorf had grown to a town with 3000 inhabitants, but
still without a health service. Pastor Clemens Meier from St. Hippolytus sent a letter to
the poor Franciscans in Olpe to ask for nuns to help with the health care service. On
June 14th 1899, hundreds of Troisdorfers were standing at the train station and
welcomed the four nuns with exaltation. They accompanied them to the house in which
they were about to work in the Hofgartenstraße 1, which would later become the
restaurant “Zum Treppchen”.

The four women worked as nurses, taught young women how to run their households
and lead a kindergarten. After only a few weeks, their room proved to be too small and
they moved into a house in the Frankfurter Straße 10. But even that larger room was
again too small after a short while and they moved once more into the new building in the
Schlossstraße in 1902, the oldest part of today’s hospital. The foundation stone for the
hospital we are seeing in front of us, was laid in 1975 and the house was ready to be
used in 1979. Today, St. Josef hospital is still run be the Franciscans of Olpe, but now
employs 5000 workers. It is still lead by an abbess.