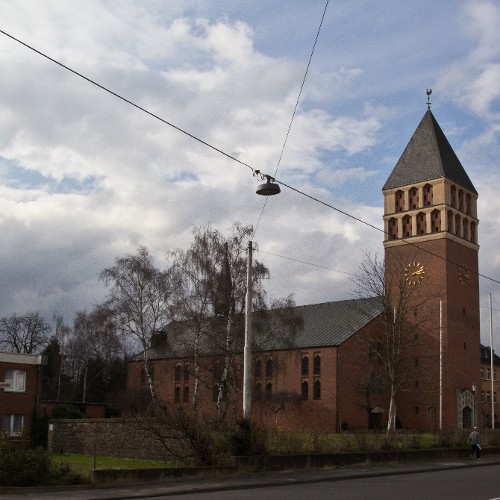 We are now in the Hippolytusstraße in front of the Catholic Church of St. Hippolytus.
The patronage of St. Hippolytus indicates that the church is very old and its first
construction took place in the Middle Ages. However, this is not the case. This church
was in fact not built until 1966. The tower of the original church is just underneath the
one we can see here.

The predecessor of this church was built in the sixties of the 19th century and the one
before that originated in the seventies of the 18th century. More information on elder
churches that were here before could not be found.

Because the archdiocese already had plenty of churches in the 1960ies, it would not
subsidize any new buildings, but pay for renewals only. So the Catholics of Troisdorf
decided how to achieve their goal of a larger church that could fit at least five hundred
believers: They demolished the church, leaving out only the tower and the central part
of the choir and then built a larger building around them.

It will most likely remain a secret why back in the days, this church was built on the
western end of the village, when all the churches were standing in the middle of the
village. The center of the village back then was right at the other end of the
Kirchstraße in the direction of the Ursulaplatz, around the area where the
Hofgartenstraße takes a turn from the Kirchstraße. It was the highest point of the
village, and we may suppose that the very first church in Troisdorf was built perhaps
900 years ago. Maybe even earlier, because Troisdorf is first mentioned in 1064 as
“Truhtesdorp”, when the abbey on the Michaelsberg was founded.