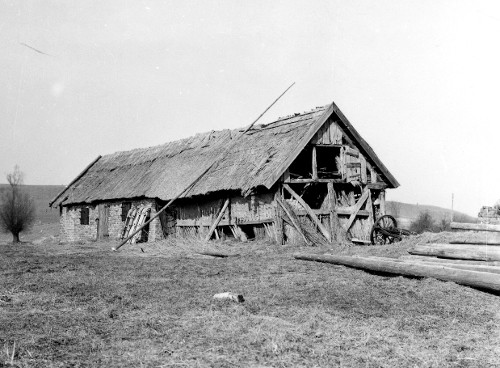 Follow the Dorfstraße towards Alt Reddevitz. Along the road you will come by thatched houses and marvellous views over the lagoon landscape. By now you have reached the old district of Kleinhagen. Near the water you will find the so called „Salzhaus“ – at the former bulwark (harbour). Only foundation walls show the former salt houses. In the 19th century they were used to store precious rock salt as well as filled herring barrels.
Prior to cans, fish had to be salted and stored in wooden barrels in order to preserve them. The bulwark was also designed as a quay for steamboats and sailing ships.

Did you see the Windschöpfwerk Lobbe in the East?
Also the younger successors of Mönchgut carry on cattle breeding and farming.
Obviously they wanted to cultivate more area. Therefore, they built a pumping station powered by wind in 1922 with which they could drain areas. Out of 33, this is the only pumping station that could be preserved after two reconstruction measures.