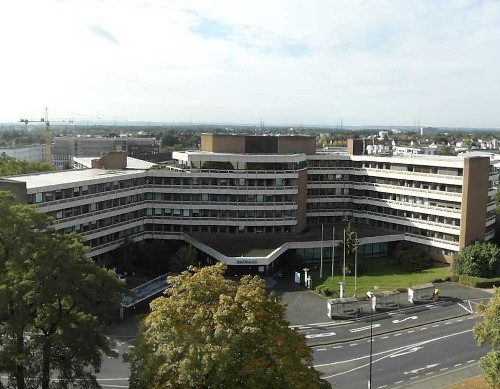 Now, the town hall is in front of us, located in the Kölner Straße 176. On the first of
August in 1969, the new city of Troisdorf was declared through a municipal reform, as a
union of the community of Sieglar, the small town of Troisdorf, Friedrich-Wilhelmshütte
which had belonged to Menden before, and Altenrath which had been part of Lohmar.

The contract stated that a new building in Sieglar was going to be the new town hall.
Soon, this proved to be too small though. Over the next years the city council worked in
eight different buildings. It was an unbearable situation. So the city decided to buy this
building in front of us in 1994 for 35 million German mark. It was previously owned by the
pension fund of the Dynamit Nobel enterprise and had been the company’s headquarter.
The city council moved in just a year later, in 1995.

Surprisingly for many people from Troisdorf, this building stands on the former ground of
Sieglar. It was designed using the principal of the short ways, composed of two trident
star-shaped buildings. The administrator for its construction in 1978 was the Friedrich
Flick industry administration. The main department for technology of Dynamit Nobel
planned and realized it. The building where the company’s headquarter had been before
is just on the other side of the street. This had been the first high-rise building in the
former district of Sieg and was built in 1956 by Paul Schaeffer-Heyrothsberge.