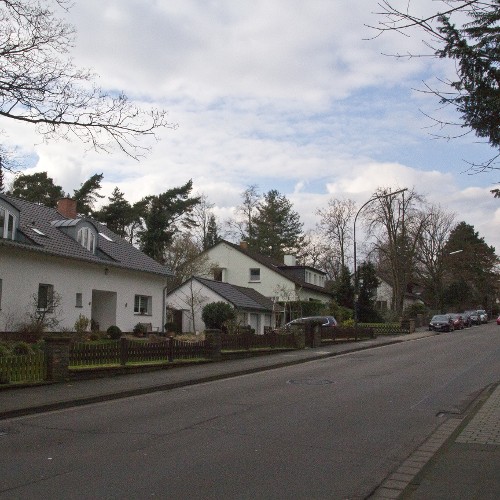 We’re standing on the corner of the little forest of the princes and Parkstraße. The
house in the Parkstraße no.1 was built in 1919 by professor Heinrich Müller Erkelenz.
He was a major architect of his time who also was responsible for the Hotel Excelsior
Ernst in Cologne, several villas in the wealthy district of Cologne-Marienburg and last
but not least, the famous hotel on the Petersberg near Bonn. This house in Troisdorf
was built for Gustav Leysieffer, who was a chemist at the Rheinisch-Westfälische
factory for explosives, which was later renamed into the Dynamit Nobel corporation.

Leysieffer was one of the most important colleagues of Paul Müller. In 1919, both of
them faced an almost insurmountable problem. The First World War was over, the
Treaty of Versailles had determined that Germany was not allowed to produce any
more explosives, and from one day to the next, the Rheinisch-Westfälische factory for
explosives had to stop its production altogether. They had to change their products
completely in order to continue their existence. Luckily, in 1905, they had already
started to fabricate plastic. They extended their plastic plants which prospered rapidly,
also because Leysieffer invented the base material “Trolit”. Several thousands of
employees worked in the plastic production and finally Paul Müller initiated a merger
with Dynamit Nobel. The new company opened its headquarters in Troisdorf in 1931.
Paul Müller continued to lead the company.

On the opposite side of the street, we can see six houses that were apparently built in
a different time, in the 1950ies to be exact. They cover the entire left side of the little
forest of the princes.

The most important inhabitant of this row of houses used to live in no. 6: director
general Biedenkopf, father of the late Prime Minister of Saxony, Kurt Biedenkopf and
father of another son, who used to work in senior positions at Dynamit Nobel.

One can assume that the name “little forest of the princes” played an important role in
ensuring that these gentlemen chose this place to live. This was how it happened:
After the Second World War, senior executives of Dynamit Nobel met with
representatives of the city of Troisdorf on a regular basis. One day a city councilor
asked, why none of them were living in Troisdorf, but in Bad Godesberg or in Cologne
instead. The answer came promptly: “Because you can not offer us any properties."
The city reacted quickly and offered them the parcels of land next to the little forest of
the princes.

Originally, the way from the upper part of town to heathen of Troisdorf was called
“cattle alley”, because it was where the cattle was led through to reach the heath for
summer grazing. During the First World War, the church planted trees here and
named it the little forest of the prince, in honor of Prince Adolf of Schaumburg-Lippe,
the son in law of Emperor Wilhelm II., who had died during the war in 1916. The
prince also had had close relationships with the regiment of the Rhenish Hussars in
Bonn, which had practiced regularly on the heathen of Troisdorf.

The name change must have seemed like a blessing in the 1950ies, because who
knows if the senior executives of Dynamit Nobel would have been built their houses
into a “cattle alley" after all.