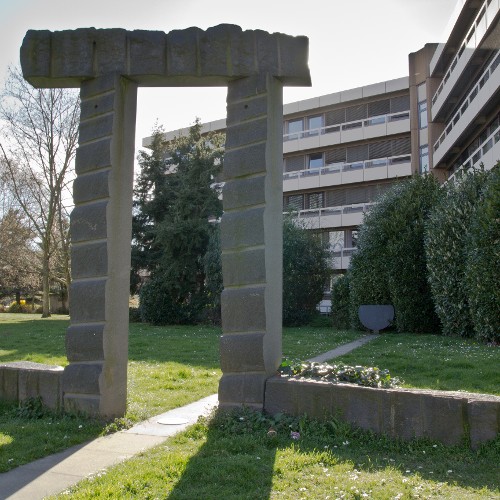 For the lawn on the left side of the town hall, a large sculpture was made by Victor
Bonato in 2002. It’s a place to remember the fate of forced laborers, such as Tonino
Guerra and his “departure in Troisdorf”. Tonino Guerra was born in 1920 and had
distributed pamphlets against the German occupation in Italy. He came to Troisdorf as a
forced laborer in 1944. Here, he began to write poems of consolation for his fellow
sufferers. After the war, he started a career as a screenwriter and became very famous.
Guerra wrote screenplays for 70 movies, among them “ Amarcord” for which he won an
Oscar. For Federico Fellini, he also wrote “Blow Up”. The “Voyage to Cythera” was
written for Theo Angelopoulos. For this screenplay, he won the Palm d’Or in Cannes in
1984.

In 1994 the city of Troisdorf invited Guerra and he suggested some ideas for poetic
places and a suitable location for this monument. The relationship with Tonino Guerra
was established by professor Roland Günter, the “father of the worker colonies” in the
Ruhr. The city of Troisdorf had also asked his advice for the Mannstaedt colonies in the
1980ies. Roland Günter wrote the book “Tonino Guerra: Departure in Troisdorf”. In 1992
for the days of culture in Troisdorf, it was published by the office of cultural activities of
the city with the publishing company Klartext from Essen.