from the guide Artists' Memories of Mount Pleasant 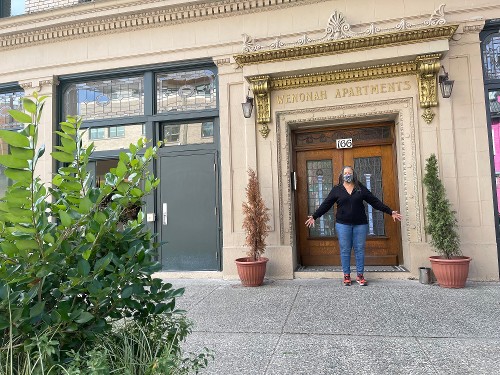 Michelle lived in the Wenonah Apartments, owned by a woman who wanted to restore it to its original art deco design.

We are now here at, actually 11th and Main and we’ve come up the street from where Burcu’s Angels used to be. And the Wenonah Apartments, this fantastic space. Back in the day, I had a suite here for $700, a two bedroom suite with a big, huge bathroom. And the cool thing about this place was it was owned by a woman who had survived the Holocaust, and she had the most quirky sense of aesthetic. She decorated the walls with the kinds of art that doesn’t sell in thrift stores. Okay. So it was a wild collection of things and people who gravitated to this space were really interesting group of people. We would have parties in this building. People would leave their doors open and guests would go between various suites because everybody kind of got along and had a similar, uh, I guess, quirky sense of aesthetic as well. The fact that we all lived here. The rent was fantastic. You cannot find something like that here in Vancouver.

And the building manager was a man named Robert who worked at Architectural Antiques, which was also just down the street. He befriended the owner because she had this aesthetic and wanted this building to be turned back to an art deco building. So every time he saw a piece of stained glass that would have been around the time of the original construction of the building, he collected it. And when I first lived here, there were only about two suites that had stained glass. And now you can stand here and look, the whole perimeter is filled with stained glass. Robert is still connected with this building. His whole suite is done in 1912, completely retrofitted, including the old school phone. And there’s just recently an article about him and his connection to this building. The owner has since passed, but the legacy of the vision that she had for this space carries on.

And I hope this is one of the buildings that will be around for a while. I hope it gets heritage status and you can see from the grand entrance, it was really stunning in it’s day.