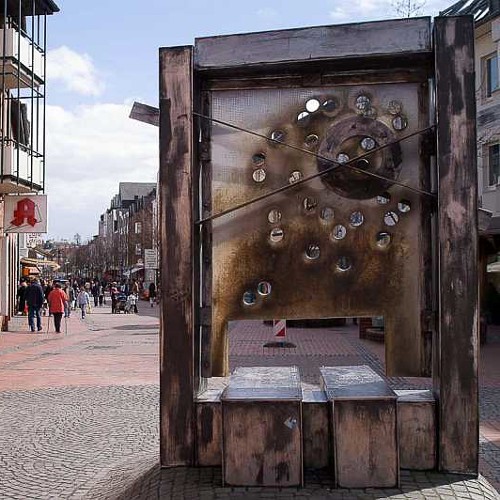 The road of the pedestrian zone widens to make room for a large art work that was
created in 1984 for the sculptors’ meeting, but it has a more historical meaning.
This sculpture was designed by Hans-Joachim Breuste, who already had been in
touch with professor Gustav Stein since the 1970ies. Stein was the managing director
of the federal association of the German Industry and the most important art sponsor
of his time in Germany. Breuste had the idea of an artwork combining social criticism
with the industrial history of Troisdorf, and the company Dynamit Nobel in particular.
When he learned of the sculptors’ meeting, Breuste applied to participate and was
approved, although his work was way beyond the scope of a four-week symposium.

We can now see a door frame out of stainless steel, about three meters high and one
and a half meters wide. The steel would shine, had it not been painted irregularly with
a grayish-brown color and thus been made to look ugly. The frame is filled by a thick
plastic sheet, which has been pierced by bullets and is boarded by two cross beams
also made of steel. Two steel sarcophagi have been placed underneath. One displays
the number of war casualties since 1903, when Henri Dunant was awarded the first
Nobel Peace Prize. On the other sarcophagus, Henri Dunant and his successors are
listed. It truly is an anti-Arc de Triomphe, a memorial of those who died, which
deliberately has been placed in middle of the city.