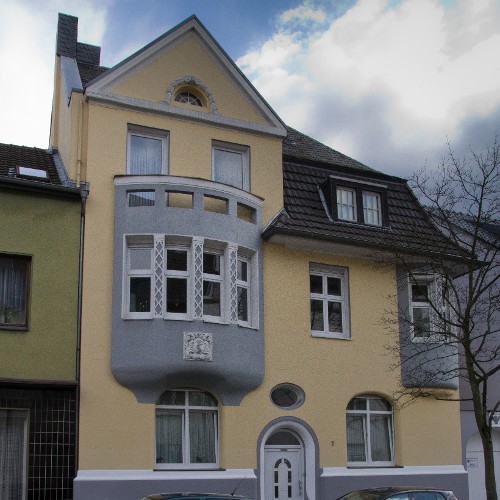 Still on the Hans-Jaax-Platz, we can take a look at the Kronprinzenstraße, the street of
the crown prince, and easily see the positive influence of the railway station for the
development of Troisdorf. First, we will take a look at the whopping house on the corner
to our right. This is the hotel “Zum Kronprinz”, built in 1900. So after the train station had
been built, it still took a few decades until people started building. This was the first house
next to the station.

The house no. 7 on the same street was built in 1913 by an architect from Troisdorf,
Josef Probst, for doctor Trier, who was a contracted physician of the state railway. The
symbol of the German state railway was placed above the entrance on the right-hand
side. Where the first floor is, we can see the rod of Asclepius which identified the person
living here as a doctor. In these times, Trier was one of the most popular inhabitants of
Troisdorf, funding a lot of institutions and associations.

Walking on, we find more houses of the first two decades of the 20th century here.
Several of them were built by engine drivers, two by directors of the Mannsteadt
factories, that we will hear more about later on.

The constructions on the other side of the street began on the corner of the Poststraße
and the Kronprinzenstraße with the post office, built in 1925.

The following houses were all built in more recent times, starting in the 1930ies. We can
tell that the original Troisdorf, in between the Hippolytus Church and the Ursulaplatz
down to the Taubengasse, moved more and more to the northeast, and closer to the
railway station.