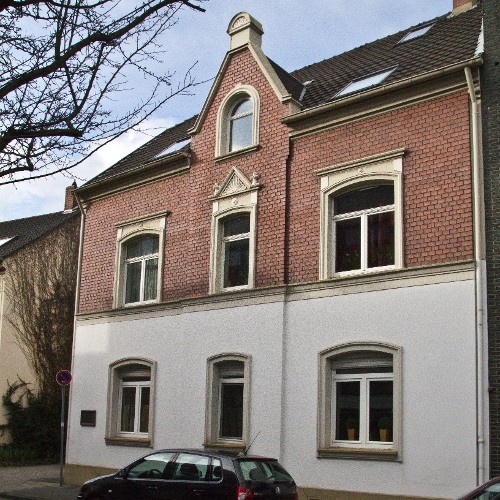 A bronze plate on the house in Kirchstraße no. 39 tells us that Wilhelm Hamacher
used to live here.

He was born in 1886 and received his PhD in 1911 at the University of Bonn in the
field of philosophy, in the department of history. Hamacher became a teacher and at
the end of the war the managing director of the Rhenish center. In this position he
was also a member of the Reichsrat in Berlin from 1926 to 1933. Then, in 1933, he
came back to teach again. Immediately after the war, he refounded the Rhenish
center and was its first chairman. For a few weeks he even held the position of
education minister of the newly founded North Rhine-Westphalia. Hamacher led a
heated argument with the first Chancellor of Germany, Konrad Adenauer, because
Adenauer was determined to found a new party to unite all Christians. At this time,
however, the Zentrum was traditionally a Catholic party. Wilhelm Hamacher was so
closely associated with his Catholic belief that he could not imagine it to be separated
from the Catholic party. They led a mainly written argument, the letters are today
displayed in the archives of NRW in Duesseldorf.

Hamacher became the headmaster of the high school in Siegburg and in 1949 a
member of the first Federal Parliament and Mayor of Troisdorf. One of his goals as a
mayor was to turn Troisdorf intoa city. Unfortunately, Wilhelm Hamacher didn’t live to
see his goal achieved. He died in 1951, and Troisdorf wasn’t established as a city
until March of 1952.