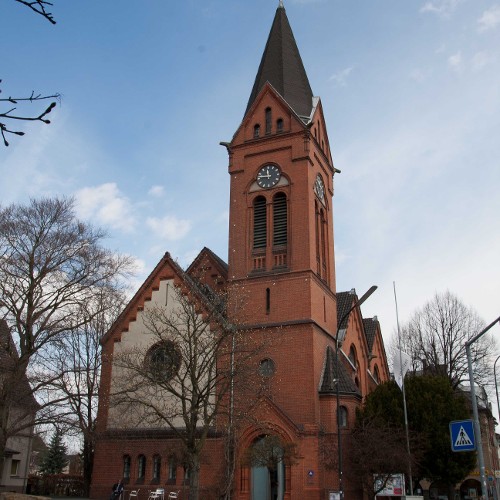 Now we are standing in front of the Protestant church of Johannes to learn more about
how the Protestants came to Troisdorf. In 1840, there were only three Protestant families
in Troisdorf and Sieglar: The administrator of the Burg Wissem, the manager of the Alaun
lodge in Spich and the telegraphist of the telegraph in the forest.

Only 60 years later, in 1903, Troisdorf already had 3500 inhabitants and almost a third
was of Protestant belief. What had happened?

With the industry growing, people from the Protestant parts of Germany came to Troisdorf
and founded a community of considerable size in the mostly Catholic Rhineland. The
community life began in 1860, when Emil Langen offered his own rooms to hold services
and teach Protestant students. The result was an official Protestant school in Friedrich-
Wilhelms-Hütte, but neither a room for prayers nor a church existed yet. For years,
people met in the living room of the Schulte family, in the Kölner Straße 126, to pray. In
1896, the vicar Walter Neumann was ordained, but there was still no room to pray. The
more important problem was the need for a school though, because the majority of the
children that went to school in Friedrich-Wilhelms-Hütte came from Troisdorf. In 1900, a
new school was built for them in the Viktoriastraße. Then finally, in 1903, the Protestant
church was constructed, a new-Roman building designed by the architect Friedrich Adolf
Cornehls from Elberfeld.

Since the first priest was wealthy, he built himself a private house in the Viktoriastraße at
the end of the 19th century, also made of red bricks. This house is still magnificent today
and stands out with its writings under the ridge: “Fromm und Klug, Sonder Trug”. In 1903,
the Johannes Church was finally inaugurated.