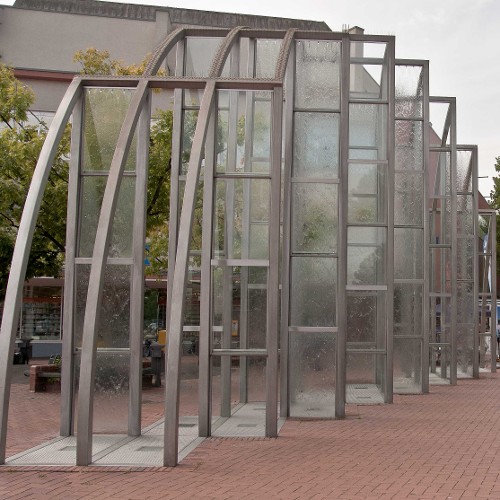 This is a very important historical site in Troisdorf, because the center of the village
and the school were here. Today, it is the location of the forum that was built in the
late 1960ies as a department store by Hertie. The original buildings on the opposite
side, Kölner Straße no. 1, no longer exist. Since the 18th century, this was where the
house of the Muelhens family used to stand. Wilhelm Muelhens was born there in
1762, who would some thirty years later establish the company 4711 Eau de Cologne
in Cologne. Wilhelm had eleven brothers and sisters, and many of them became
wealthy like him. Three brothers were bankers in Cologne, Koblenz and Frankfurt.

The large gate that you can see here today was built as an extension of the
pedestrian precinct. Since the late 1970ies, Troisdorf had wanted a pedestrian zone.
But the problem was the national highway B8, that had been an ancient trade route a
long time ago and ran right through the city. So the Theodor-Heuss-Ring was built as
a bypass which passed the train station and didn’t reach the old road until north of the
city center. This left enough room for a new pedestrian area.

The construction started in 1979, at the lower part of the Hippolytusstraße. Then, the
Tchorz brothers from Cologne won an architectural competition and they invented and
built the pedestrian zone as it exists today. Originally, for the two entrances to the
pedestrian zone the brothers had planned Mero constructions, which were metal
tubes joined together in various ways and which were very popular back then.
Nowadays, Mero constructions can still be found in the Cologne city center for
example. The city of Troisdorf didn’t like the idea of these constructions because they
could be seen in many other buildings at the time, like the community center and the
comprehensive school.

So an art competition was held. The artists, Joachim Bandau, from Aachen, and
Victor Bonato from Niederkassel, won it. They had the idea to work with steel and
glass, the materials Troisdorf is known for. To be exact, it is not glass that the city is
known for, but rather a plastic safety layer for glass, which protects people in car
accidents from being hit by bits of broken glass.
Bandau and Bonato created the semicircle we are facing now, and a quarter arc for
the upper part of the Kölner Straße. They positioned them with their open sides facing
the city centre. The idea was to open up the city for visitors, unlike the potential
closure at any time the medieval gates used to stand for. All of the national
newspapers wrote about those new types of gates in 1982 and praised the artist’s
courage to build these pieces of art.