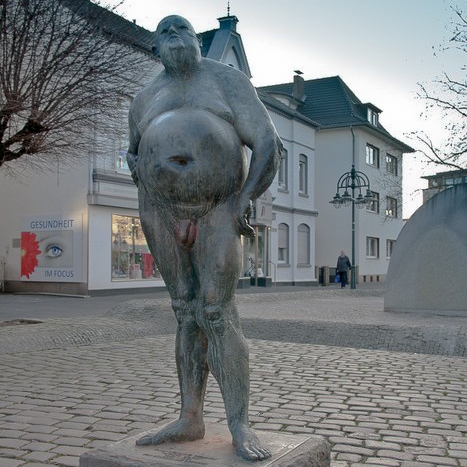 We are standing on the Fischerplatz. A stone of Giovanni Vetere was placed here
during the first meeting of sculptors from Troisdorf. Also, the now legendary big man
is here, who at the time we prepared this walk, was covered in plastic to be protected
from construction work.

In 1987, three galleries in Troisdorf were selling fine art: The galleries of Inge Donath,
of Siggi Theisen and of Brigitte and Giovanni Vetere. In cooperation with the city,
these galleries featured a display of art works from various artists throughout the city,
which could be seen in almost the entire pedestrian zone. One of these pieces of art
is the big man.

To some, he looks terrible, pathetic to others and some simply find him to be a terrific
art work, so from the day he was first shown, he caused lively debates and
arguments. Giovanni Vetere asked the city to buy the figure that caused so much
attention and Troisdorf would have liked to do so, but it was too expensive. The
gallerist set an example and donated 5 000 marks. Hans-Henning Seemann from
Stuttgart, who had created the figure, wanted 60,000 marks for it though. So while the
people kept arguing whether the big man was worth all the many, the city started all
kinds of fundraising activities. City manager Heinz Bernward Gerhardus, the head of
the Culture and Education Office Georg Kern, Ulrich Grossmann and members of the
Cultural Committee participated in raising the money and managed to collect 55 000
marks in the end and Seeman agreed to sell the big man to them.

When he was first displayed in the exhibition, the big man was placed in the water of
the fountain. But Seeman didn’t like him there. The artist preferred to see him
standing among the people passing by. He argued that the figure represented a
simple man, whom he created in the early seventies after a then 35-year-old worker
from the VW plants in Wolfsburg.