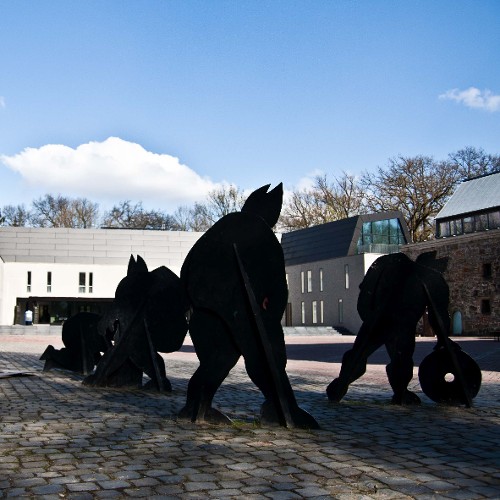 Right next to the Burg Wissem, you can see a group of figures from the famous fairy
tale “Hans in Luck”. Troisdorf artist Michael Sönksen created them in collaboration
with the apprentice workshop of Dynamit Nobel out of steel plates. “Hans in Luck” is
here, because it was the favorite fairy tale of Wilhelm von Alsleben, who was
responsible for founding the museum. Since the end of World War II, von Alsleben
had collected many picture book illustrations and originals that he wanted everybody
to see. So he decided to give the pictures to the city, asking those responsible to build
a museum for them and put them on display. This is why the Picture Book Museum
was opened in 1982 and also, just a few years later, this group of figures from “Hans
in Luck” came here.