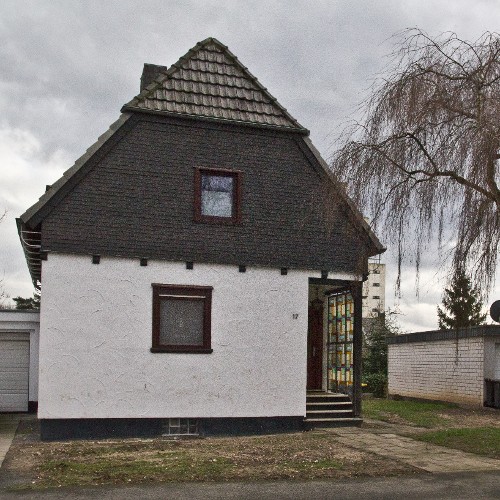 The first houses in the Carl-Diem-Straße weren’t built until 1949. The house number 17
has a very special history. When a big exhibition called “Troisdorf in the mirror of time”
opened in 1950, this house was raffeled off. The batch cost only two German marks. The
city council called this price way too high, but still continued with the raffle and published
the winning number in August. Nobody responded. The news made the headlines in the
national newspapers. Then an electrician from Stommeln responded. He had decided
that he didn’t want to live in Troisdorf, because his customers lived elsewhere. In the last
minute, just before the council was about to draw a new number, he arrived. They asked
him why he hadn’t come before. He answered that he had just completely forgotten about
it. But why had he even bought a raffle ticket to win a house if he lived so far away from
Troisdorf in the first place? His answer was this: “It didn’t make a difference if I buy a
drink for a mark or if I buy a batch.” Now he suddenly had become the proud owner of a
single-family home. Jupp Mimzeck, a famous personality of Troisdorf, prince of the
carnival and involved in various other activities such as St. Martin, heard about this and
convinced the electrician to sell the house to him. He would never tell for how much, but it
must have been really really cheap.