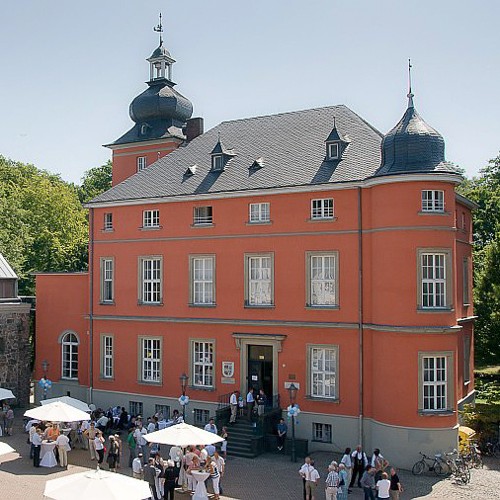 If we look around the courtyard of the Burg Wissem, we see buildings from four
different decades.

The oldest building is the one made of quarry stone. It was built in 1550. The baroque
entrance gate, which is preserved only in part, originated in 1741 as we can see it
being written down above the archway. It was renewed at the same time as the
museum not many years ago. Baron Franz von Cortenbach was the builder of the
gate.

The castle Burg Wissem itself is from 1845. Twelve years before, in 1833, the family
of Loe had bought the entire property. Clemens von Loe was the first lord of the castle
Wissem who was named “Loe”. He had been born at Schloss Wissen in Weeze on
the Lower Rhine, the ancestral home of the extended family of Loe.

Since 1939, the city is the owner of this property. The Picture Book Museum opened
in 1982 inside Burg Wissem and exhibits original illustrations that have later been
used in children’s books. A foundation started the museum when a former factory
owner from Troisdorf named Wilhelm Alsleben, gave his entire property of illustrations
to the city, but only under the condition that they would be displayed.

The fourth, most modern building, has been built over another. After the Second
World War, Burg Wissem had become the town hall of Troisdorf, because the
previous one in the Poststraße, not far from the train station, had been destroyed. But
in the course of the 1950ies, it proved to be too small to fit the whole administration.
So an extension was built in 1960, which is still here today.

This entire property demonstrates Troisdorf’s industrial history and portrays its urban
development. In addition, people can also get married here and do like this beautiful
setting for their special day. In the newly built house of the Burg Wissem you can not
only find the Museum of Urban Development and Industry and the gateway to the
Wahner Heide, but also the tourist information of Troisdorf, that offers all the important
information for those visiting the city for the first time.