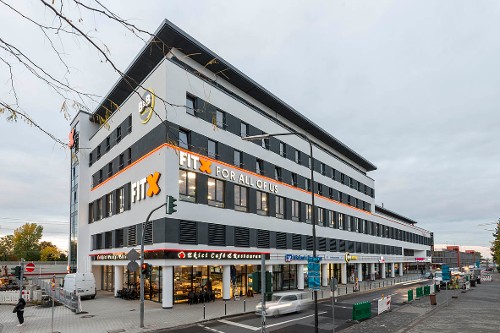 We are on the Hans-Jaax-Platz in between the train station and the bus station. Hans
Jaax was mayor of Troisdorf for 18 years, from 1975 until 1993. This is an important
location in Troisdorf, because the transformation of the city to the modern era was only
possible because of the railway.

Overall, there were three railways in Troisdorf. The first one was the valley railway of the
river Sieg in between Deutz and Hennef, constructed in 1859. The second was the
railway on the right-hand side of the river Rhein from Cologne to Niederlahnstein, built in
1871. And the third and most significant one was a railway for freight trains only, from
Mülheim an der Ruhr to Troisdorf, which was exactly 100 kilometers long. 100 kilometers
was also the maximal distance a steam engine could perform before running out of water.
This automatically made Troisdorf an important stop for the state railway, because in the
meantime the railway had been nationalized.

Before, in 1859, they had forgotten to include Troisdorf in den railway system with a train
station. The village was then very small and about 400 meters away from where the
railway station stands nowadays. Thanks to Emil Langen, who had taken over the rolling
mill in Friedrich-Wilhelms-Hütte in 1843, Troisdorf received a railway stop in 1862. 24
years later, Emil Müller, who had a factory for ammunition and explosives in Opladen,
could be convinced to invest in Troisdorf. Wilhelm Engländer, legal adviser of the
Oppenheim bank, helped to persuade him. Only one year later, in 1887, the production of
explosives in Troisdorf began.