from the guide The Unique Mount Pleasant Triangle Building 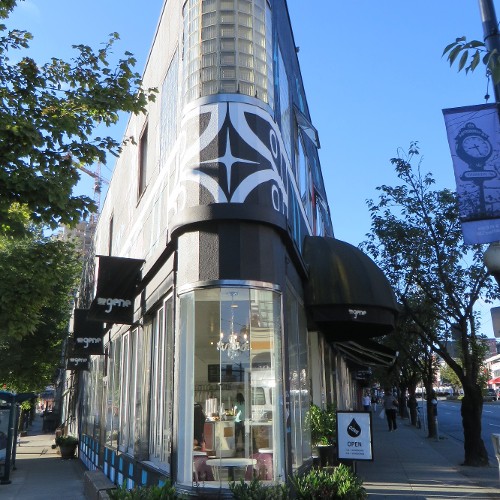 My name is Danielle Peacock and I have lived close to the Triangle Building, at the intersection of Kingsway, Main and 7th Avenue in Mount Pleasant, since 1980. Since being built in 1947, the building has been home to countless independent businesses and many social, cultural and arts groups. It is steeped in the evolving story of the neighbourhood and has a spirit that I love.

Having access to this varied and intimate kind of shopping experience has been one of the big pleasures the building has afforded me and the community over the years. One shop I went to often was Bain’s Candies and Fine Chocolates, which was in the tip of the building from 1948 until circa 2002. People still remember its long-time proprietor and confectioner Campbell Munro, who died in 2004 at the age of 94. I was once organizing Christmas gifts for children and he and his wife Dorothy made me special chocolates that were the first letter of each of the children’s names. Campbell and Dorothy were so lovely to deal with.

In 2008, the space where Bain’s had been became Gene Cafe, named after the building manager who is still there. Gene provided much help to Gideon James, the first owner of the cafe. One of Gene Cafe’s key features has become the long, square, benches, which fit perfectly along the side of the building. The logs for them came from a logging site around Squamish, owned by one of Gideon’s relatives. Now known as Gene Coffee Bar, with different owners, these distinctive benches have been part of making Gene a continually popular place to hang out.

Usually, if I walk by in the morning, I can count on seeing my long-standing friend Glenn Alteen, co-founder and long time but now retired director of grunt gallery, sitting outside with his buddies Lawrence and Ahmed. They have been regularly meeting there for years and I find something very comforting in this; maybe it’s seeing them carry on the centuries old custom of daily community connection.

One of the essays in the Museum of Anthropology’s book documenting Lawrence Paul Yuxweluptun’s exhibition Unceded Territories, is titled Social Forms of Engagement – Coffee with Yuxweluptun on the Main Street Side of Gene. It is by musician and writer Michael Turner, whose 1995 book Kingsway is a collection of poems that evolve around what is Vancouver’s oldest thoroughfare.

With its unique shape, features and location, Gene is a treasured gathering spot for people not only in the neighbourhood, but city-wide.

Now come with me as I tell you about the Kingsway and Main Street sides of the building, as well as the upstairs in parts 2, 3 and 4.